Training Our Activists for the Future

Over recent years, the NUT has begun the process of rebuilding itself as an organising union which draws strength from its membership and prioritises workplace organisation.  This has necessitated a complete shift in our approach to Rep training.  NUT Reps form the bedrock of the Union and, in response to the current fragmentation of the education system, have a key and increasing responsibility for organising teachers in their workplace.
Our previous system of Rep training, while it was appropriate to the role as it existed a number of years ago, has become inadequate and, over the past year, the NUT Training & CPD Department has been developing a new course to respond to the current demands on Reps.

The course is built around a 10-day training entitlement which Reps can access in a single year or spread over a number of years.  The training outline can be seen here: 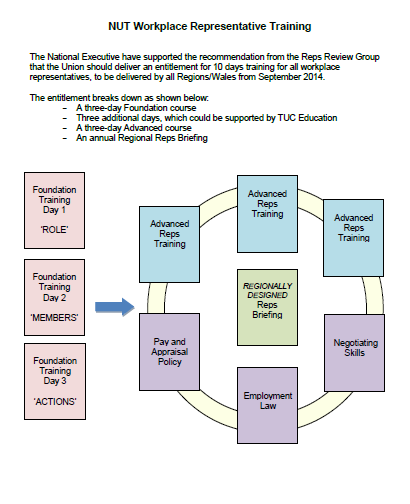 The Training and Professional Development Sub-Committee, meeting this morning, received a report on the completion of the Foundation Course and beginning the development of the Advanced Course (to be ready in early 2015).

Having seen the new course material and been involved in trialing some of the activities in different contexts, I am very excited about the release of this new course, which will truly equip our Reps for the changing landscape in which they will be operating.  The course will run several times in the autumn term (see here), with the first course in my executive area in Oxfordshire in February.  We will also be running the new Advanced Course alongside the Foundation, in the same venue, for Reps who have completed Level 1 in the past year.

The committee also received the very positive feedback report from the Division Secretaries' Briefing in October and held a discussion on local training provision.
Posted by Gawain Little at 23:11