Sneering at the Electorate Will Do Labour No Favours

There are a variety of views about the European Union amongst traditional Labour supporters and the country more broadly.  There are those who believe that it is a panacea for all the ills of the world, from war to economic instability to poverty.

There are also a growing number of people who have concerns about the EU, over the widely publicised Transatlantic Trade and Investment Partnership (and the Comprehensive Economic Trade Agreement with Canada), over the services directive which attempts to impose a model of privatisation based on Britain's rail network across Europe, over the posted workers directive and European Court of Justice rulings which allow the super-exploitation of migrant workers to undercut national collective agreements, or the recent attempts to overturn the democratic will of the Greek people and subject their economy to yet more free market shock therapy.


Suffice to say there is a legitimate debate amongst trade unionists, Labour supporters and the population at large.

So I was shocked to find this on twitter this evening: 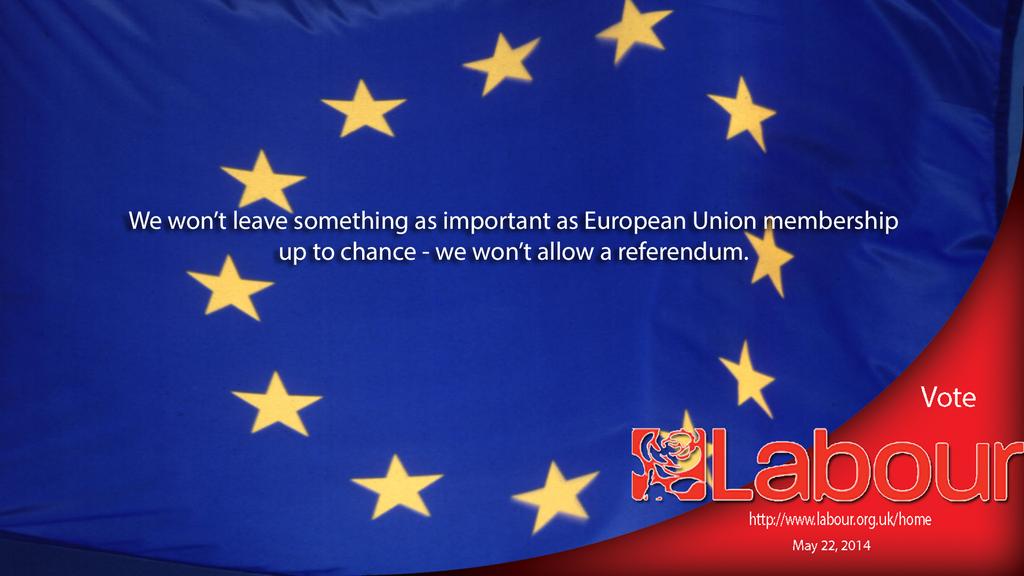 Now, I have always taken my right to vote very seriously.

Indeed, it is a right people have fought and died to win and to protect.  The right to vote is fundamental to our democracy (limited though it may be by the dominance of those with the money to buy influence).

One thing that voting is not, is 'leaving things to chance'.

And it is shocking that a party which has set itself the task of winning back the lost millions by listening to the voices of ordinary people should suggest that a democratic vote by the British people amounts to nothing more than chance.

But it also appeals to a distasteful, sneering logic: that there are those out there who are not as sophisticated as you and clearly don't understand.  To give them a voice would be no better than 'leaving something to chance' but don't worry, we will protect you from this by ensuring they are not heard.

Indeed, it is reminiscent of the arguments put against universal suffrage throughout the ages: give the masses a vote and we will have mob rule; better leave politics to those who are naturally superior.  This very argument was used against the Labour Party in its early days.

Now, I write this as someone who has voted Labour in every election since I was eligible to vote and who believes that the election of a Labour government in 2015 is the only way to protect the people of this country from an intensification of the misery and suffering that has been inflicted since 2010, but even I know that this is very, very wrong.

If the Labour Party leadership disagrees with the views of those who are opposed to the policies and the direction of the European Union, it should seek to engage the in a wide-ranging public debate.  It should put forward its arguments in favour of TTIP, in favour of privatisation and in favour of EU limits on social spending.  Or it could seek to find the elusive 'Social Europe' which has persuaded trade union leaders down the ages to throw their lot in with the bankers and chief executives at the heart of the European Union.

Declaring instead that they will not 'allow' a referendum is simply an insult to the people they seek to represent.

What next?  Is politics to important to be left to chance?
Posted by Gawain Little at 23:31