After some delays at Heathrow and Charles de Gaulle due to fog over Paris, we set off this morning on our ten hour flight to Havana. Given the connections with Cuba's innovative literacy campaign, I thought it would be a useful opportunity to re-read Education for Critical Consciousness by Paulo Freire. 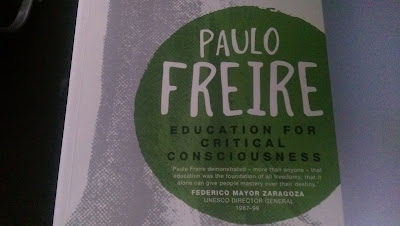 In these two essays (Education as the Practice of Freedom and Extension or Communication written in 1965 and 1968 respectively), Freire is concerned with the liberatory potential of education but also the necessity for education to be critical and democratic if it is to realise this potential.

I was particularly struck by the following passage:
"In alienated societies, men oscillate between ingenuous optimism and hopelessness. Incapable of autonomous projects, they seek to transplant from other cultures solutions to their problems. But since these borrowed solutions are neither generated by a critical analysis of the context itself, nor adequately adapted to the context, they prove inoperative and unfruitful... Assistencialism offers no responsibility, no opportunity to make decisions, but only gestures and attitudes which encourage passivity. Whether the assistance is of foreign or national origin, this method cannot lead a country to a democratic destination." (Freire 1965:10-13)

This discussion of imported solutions which bypass the domestic context seems to me very relevant in assessing the failure of western educational intervention to provide any answers to the problems faced by a number of developing countries in Africa and across Asia. Solutions such as 'low-fee' private schools, managerialism, marketisation and privatisation have been imposed by a variety of actors, including US/UK edu-businesses, the World Bank, IMF and financial institutions, and western governments. Sometimes this has been against the wishes of national governments, sometimes with their blessing, but it has never flowed from a critical assessment and active intervention by the people themselves, and the primary motivation is never the interests of the people.

The approach forms part of the policy set referred to by Finnish educationalist Pasi Sahlberg as the Global Education Reform Movement or GERM. Standardised testing, numerical measurement, ranking and targets dominate, leading to a reductionist approach to curriculum, pedagogy and the aims of education itself.

In the context of many developing countries the GERM comes up against weak or young education systems, still suffering from the legacy of colonialism. The result of this clash is intervention which is antagonistic to, and atively undermines national education systems and the potential of democratic control over the education process, crushing the green shoots of developing national consciousness. This is replaced with crude targets and mechanistic approaches to, for example, school attendance, without any attention to the content of education.

At the same time, the GERM approach is not devoid of cultural values. Quite the opposite. The values which are reinforced, for example by English-medium education in non-English speaking communities and 'low-fee' private schools where parents have to choose which child they can afford to send to school, are antithetical to the development of a democratic national culture.

As Freire argues, where education fails to allow people to develop their critical consciousness and, instead allows them to lapse into lack of engagement and uncritical adaptation to their circumstances, they are "defeated and dominated, though they do not know it; they fear freedom, though they believe themselves to be free. They follow general formulas and prescriptions as if by their own choice. They are directed; they do not direct themselves. Their creative power is impaired. They are objects, not Subjects" (Freire 1965:16).

I look forward to finding out more about how Cuba sought to avoid these negative tensions and achieved the Millennium Development Goals through the development of a universally-accessible national education system, free at the point of delivery, which was a genuine expression of the critical assessment and active intervention of the Cuban people.
Posted by Gawain Little at 00:58