A Message from the Teachers' Parliament 2 - Engaging Parents

Anyone watching the Newsnight 'expose' of the 'radical takeover' of the NUT on Tuesday might have been fooled into thinking that this year's NUT conference was entirely about strike action and the battle between 'moderates' and 'militants'.


In fact, far more conference time was given over to debating educational questions such as the impact of testing and the new primary curriculum, to discussing child poverty and the effect this has on the students we teach, and to talking about the importance of challenging stereotypes and supporting equality for LGBT teachers, than was to debating strike action.

And rightly so.  The National Union of Teachers is the largest democratic body of teachers in Europe and its annual conference - the annual parliament of teachers if you like - should reflect the views of the entire profession.

For too long, teachers have been denigrated in the press, attacked by government and sneered at by the education secretary while the everyday experience of students is worsened by funding cuts, poor curriculum and examination decisions and a political mantra which hates state education and those it serves.  It should be remembered that Michael Gove is the education secretary who welcomed the narrowing of access to higher education: 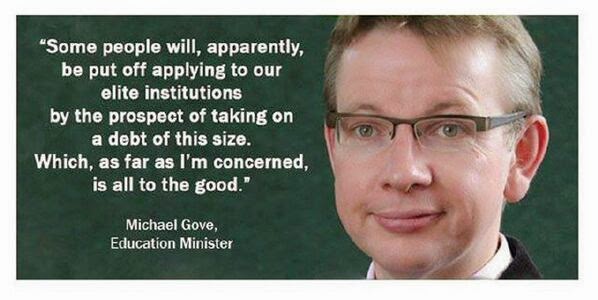 So, as well as discussing the key educational, economic and political issues we face, teachers did set out plans to make a difference.  But, surprisingly for those who subscribe to the "I heard it on newsnight so..." mindset, these plans don't revolve entirely around strike action either.

Firstly, teachers emphasised the importance of working with parents and members of the wider community.  This is absolutely essential to any campaign on education.

When I speak to teachers about why they took action on 17th November and 26th March, the overwhelming reason is because of the damage this government is doing to children's education.  This is a far greater motivating factor than any of the individual disputes over pay, pensions or workload.

Teachers see the damage that is being done to the education system and to children's futures and it makes them angry.  In this, parents are their natural allies.  The Stand Up for Education campaign outlines five basic demands to improve our education system, starting with winning back the right of every child to be taught by a qualified teacher: 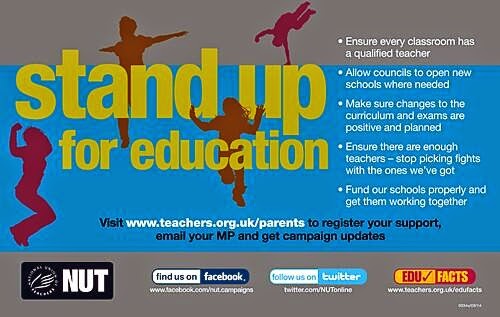 Over the next few months, we will continuing the local stalls that have been run in towns and cities across England and Wales, we will be holding more education question times and we will be working with parents and others to take our campaign to the widest possible audience.

This is much more than just strike action - this is developing a movement that can Stand Up for Education!

Pt 3 of my conference report will be posted in a few days and will look at the NUT's plan to pressure politicians.
Posted by Gawain Little at 16:24