A Message from the Teachers' Parliament 1 - Professional Unity

It's been a busy couple of weeks with the main teaching union conferences having taken place during last week and the weekend.

In spite of differences of timing and geography, the ATL, NASUWT and NUT conferences had a lot in common.

ATL conference discussed workload, privatisation, funding cuts and the impact of government policies on children.  Similarly, these were key concerns at both NASUWT and NUT conferences, along with OFSTED and accountability, which was also a key theme for ATL.

Given the shared concerns of the whole profession about the direction of government policy, it does raise the question of why there were three separate conferences this Easter and not a single democratic teachers union representing all teachers.

Certainly, this is the view of the majority of members in all three organisations.

I popped in to ATL conference last week to join their fringe meeting on the question of Professional Unity and found it incredibly enlightening.  It was clear that the teachers there shared the same concerns as NUT members in terms of ensuring teachers are able to raise their voices in defence of their colleagues, their schools and the children they teach.  There were strong arguments put from the platform (which included both ATL and NUT speakers) in favour of Professional Unity and the discussion on the floor was wide ranging.

There were some questions raised about barriers which had to be overcome in terms of any proposals for a single union, including the fact that ATL,unlike the NUT, represents support staff and the question of how diversity of opinion would be encouraged within a new union.  But the mood was overwhelmingly in favour.

This was mirrored in the equivalent fringe meeting at NUT conference on Monday of this week, where myself, Hank Roberts of ATL and Howard Stephenson of the University of Nottingham spoke: 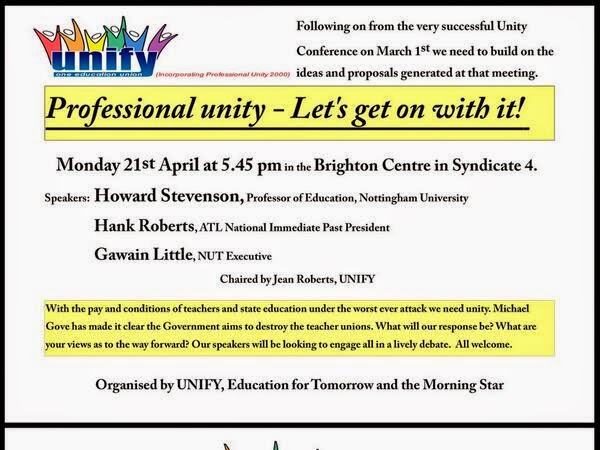 There were also two issues which did not arise in the same way at ATL conference, maybe because of the NUT's more long-term discussion of some of the issues around Professional Unity.

The first was a discussion about the positions of the various union memberships and leaderships and the implications of this for future moves towards Professional Unity.  In particular, whilst it is safe to assume that the overwhelming majority if NUT and NASUWT members and a growing number of ATL members are supportive, along with the leadership of NUT and ATL, questions were raised about the position of the NASUWT leadership.

They were of course the only teacher union not to send formal representatives to the Unity conference on 1st March but a number of NASUWT members attended and were fully supportive of Professional Unity.  It is also clearly the case that a majority of NASUWT members support the idea of a single teachers union, as to the majority of teachers.

Ultimately, it will be for the members of each union, including the NASUWT, to decide whether or not to participate in building a single united union and no leadership can stand in the way of such a decision.  In the current circumstances, it is becoming increasingly difficult to justify maintaining the status quo and those attempting to do so will have to make some difficult decisions.

The second thing to arise from the NUT meeting was a series of practical suggestions as to how the campaign for Professional Unity could be developed at a local, regional and national level.


Thanks to all those who contributed ideas.  I am sure there are lots more out there.  We are hoping to send some feedback out to individuals and local associations who supported the meeting with a list of practical suggestions so, if you have an idea to add, send it to g.little@executive.nut.org.uk.

The following blogs/articles may also prove useful in discussing Professional Unity:
Pt 2 of my conference report will look at NUT plans to engage parents in theStand Up for Education campaign.
Posted by Gawain Little at 14:56