The meeting began with minutes, matters arising and nominations for a regional delegate to TUC Women's Conference.  One name was proposed and  was duly elected.

There was then an animated discussion about the proposals from the National Executive to disband the Working Party on Support for Local Associations and Divisions: 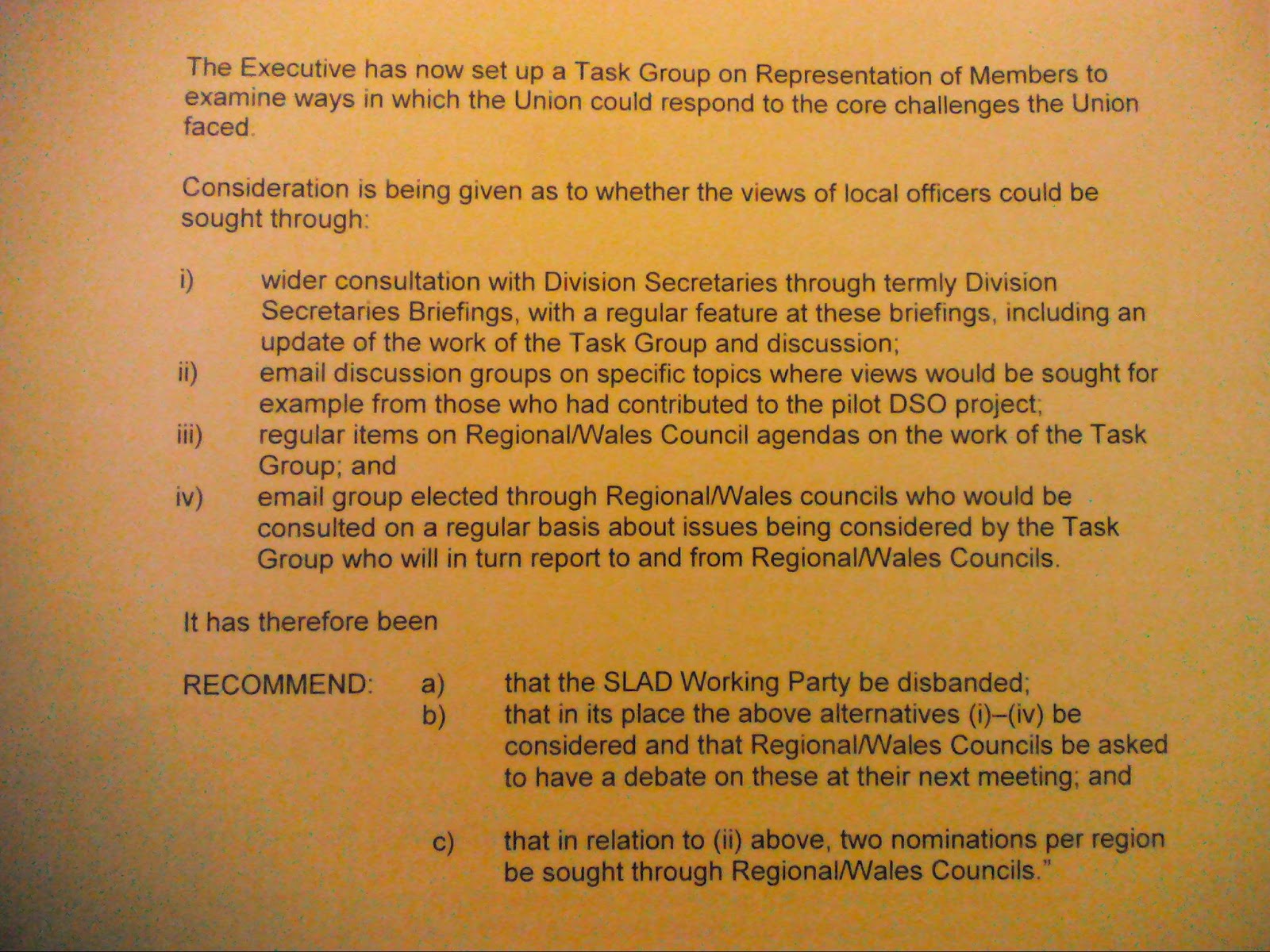 Some delegates felt that the SLAD Working Party had been effective in gathering the views of local associations and divisions.  However, it was generally agreed that there were serious weaknesses and that it was not the best structure, particularly given the setting up of the Task Group on Representation of Members.  The main remit of the Task Group has been to develop and implement the Union's organising programme.

Concerns were expressed about the involvement of non-executive members in the development of the Task Group's work, in particular given the Task Group's responsibility for the organising programme which has had such an impact across the Union.  It was generally felt that simply involving regional representatives in consultation was not enough and that, instead, option iv) should be expanded to create a wider task group (including regional delegates) which could meet several times a year.

The meeting then went on to consider the complete failure of the Task Group on Executive Member Representation (which was set up to look at the structure of the Executive) to reach any conclusions for a second year.  There was a fair amount of anger and disbelief expressed, which will no doubt make itself felt at annual conference.

There was unanimous agreement that the two key issues were:


The vast majority of delegates agreed that the solution involved:
There was also discussion about possible amendments to look at the possibilities for job-sharing Executive posts and to take account of geography in any proposed solution.  However, it was agreed that neither of these should undermine the two fundamental principles.

The rest of the meeting was focused on reports (and forward planning) from Regional Council Officers, Regional Office, local Associations and Divisions & other meetings.

In particular, the meeting agreed an ambitious programme of activity, including a Young Teacher Conference, two training events (one residential) to supplement the one already held, development of the Women's Network, and participation in Brighton Pride.  In order to fund this, affiliation fees will be raised from 2015 and, at the same time, made more reflective of membership.  Rather than having block fees at three levels, subscriptions will now be on the basis of 25p per member.

The Young Teachers' Conference is planned for the 16th/17th January.  Information will be going out soon but, if you are interested, contact me on g.little@executive.nut.org.uk.
Posted by Gawain Little at 22:40