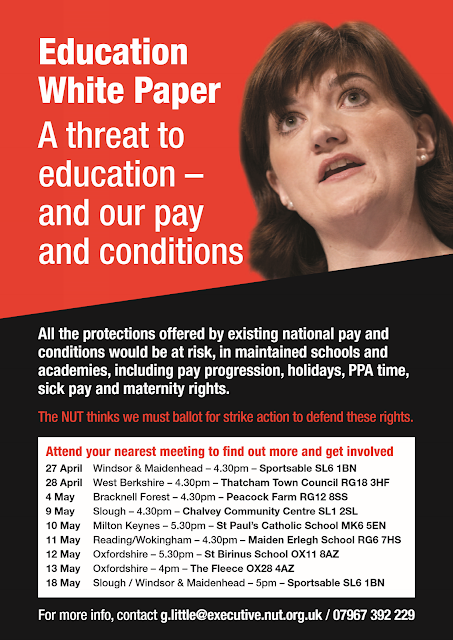 We have allies in the campaign. The National Association of Head Teachers, which has previously taken a neutral stance on voluntary conversions, will now be advising member who are encouraged to 'voluntarily' convert to refuse. Local councillors of all political parties, including prominent Conservative councillors, have publicly opposed both forced academy conversion and the removal of parent governors. There has also been huge opposition from parents and two meetings in Manchester and London, organised under the heading 'Parents Defending Education', are already fully booked at 200 and 300 respectively and now have waiting lists..

Our industrial action aims not just to defeat the threat to our members' terms and conditions posed by the white paper but to win support from Labour, the Liberal Democrats and ultimately the Conservative government for a national set of terms and conditions for teachers and increased funding for all schools.

NUT has met with the other education unions and a few days later, the Unison SEG met and agreed to explore a ballot to take action alongside the NUT in the autumn term against the threat to the terms and conditions of support staff. ATL's annual conference empowered the ATL Executive to consider industrial action on the same grounds as the NUT, based on the progress of the white paper.

The NUT ballot will be specific to England as the funding arrangements are different in Wales and there are no academies so the threat to terms and conditions is different. Centrally employed staff and supply teachers will not be automatically balloted as we have no way of knowing which are working in schools and which are employed via agencies. However, they will have the option to opt into the ballot if they meet the criteria. Sixth form college members will be balloted, although those whose term will have finished before the date of the ballot may need to be balloted separately in the autumn term.

David Wilson, Head of Organising then gave a presentation on how we can build the ballot to deliver a strong result whilst developing a new layer of Reps and activists across the country. David talked about the importance of conversation, collectivity and confidence. We will be focusing on building Rep meetings in every local association area to reach out to every school with a Rep or and active member who can attend. You can find your local briefing here. This will be followed by a massive phone-banking, aiming to reach 100k members in schools where no Rep attended a briefing. Email me at g.little@executive.nut.org.uk if you want to volunteer for the phone-banking. Alongside this, associations will be encouraged to hold school meetings throughout the entire ballot period in order to keep the momentum going and reach the maximum number of members.

I will be sharing details of this briefing with Officers and Reps in my electoral area and selected resources will be shared on the 'Building the Ballot' page of this blog.
Posted by Gawain Little at 14:58