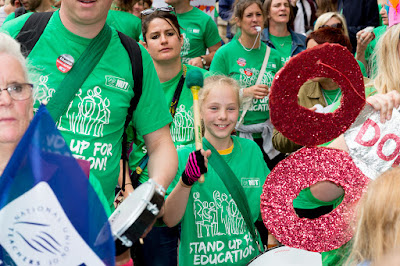 I voted for the primary assessment amendment and against the other two on the grounds that, whilst we all know that further action will be necessary to win what will undoubtedly be a lengthy campaign, we should not tie our hands whilst we are still in discussions with other unions (and particularly as no decision would be taken until the September Executive in any case).

These two issues are fundamental to the governments future plans for education and the wider Global Education 'Reform' project. An education market cannot be fully implemented while national agreements continue to exist on teachers' terms and conditions because this would limit the ability of education businesses to reduce 'costs' and compete effectively in the market. Similarly, both liberalisation of terms and conditions and restriction of funding are necessary to ensure that national agreements are broken because there is little or no incentive for schools to depart from national terms and conditions, particularly during the current recruitment crisis. Introduce a financial crisis into schools and you create one very large incentive.

This makes these issues absolutely vital for the union to fight, and win, on, not just to protect the education of current students but because it presents a real opportunity of slowing, and then reversing, the dismantling of state education. However, it also means that the government, and the private interests it represents, will fight tooth and nail to resist any movement on either of these issues. This means we need to be set for a protracted battle, possibly over several years, in which we will need to mobilise not only teachers but also parents and whole communities, principally around the question of school funding.

That means the preparation work we do in the Autumn is crucial. We need to build a movement which has the breadth and depth to defeat the government and those whose interests lie in the privatisation of our education system.


The Executive agreed the following:

1.         Develop a long term campaign strategy on funding building on the momentum gained by the strike to keep school and college funding in the forefront of public attention. The Autumn statement and May local elections will be important staging posts in that long term campaign.

2.         As part of that strategy supports and publicises a website expected to be launched in the autumn. This site will be a useful agitational tool as it will give figures for the impact of funding cuts on a school and constituency level.

3.         Writes to Justine Greening following this week’s Written Ministerial Statement on the National Funding Formula seeking an urgent meeting and giving publicity to that request.

4.         Continues discussions with support staff and teaching unions jointly and severally about ballot timescales that would allow coordinated action – including putting to them specific plans for ballots and action around the Autumn statement seeking responses for early in September over funding and terms and conditions.

5.         Seek to work with other teaching and support staff unions on funding wherever possible. A joint statement on school funding has been agreed and is about to be published. Other unions will be approached about further possible joint work on funding – including on and lobbying of MPs at a constituency level building to a national lobby of Parliament.

7.         Sends messages of support to GMB and UNISON in Derby and Durham around the disputes over TAs and sends similar messages as appropriate to other campaigns that develop.

8.         Continues to develop relationships with parent groups such as Rescue our Schools.

9.         Continue to campaign against any bill arising from the White Paper proposals.

10.       Put questions to the Labour Party leadership candidates over terms and conditions applying to all state-funded schools and funding.

11.       Integrate the Primary Assessment Campaign, particularly in respect of the impact on the break-up and privatisation of education through forced academisation.
Posted by Gawain Little at 15:08