We Must Fight to Preserve Comprehensive Education

On Wednesday, I attended the steering committee of Comprehensive Future as an observer for the NUT. It was clear from the discussion at the meeting that we face a crunch point on the future of comprehensive and selective education. 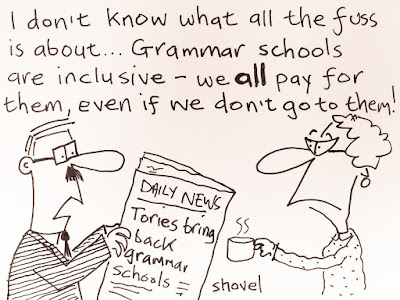 Theresa May seems intent on reintroducing selective education to those areas of the country that are currently comprehensive, as well as allowing the expansion of grammars in the selective areas. Given the fact that this government has few other domestic policies that haven't already ended in a U-turn, it seems possible that they will go for full repeal of the ban on new grammars, maybe within the next few weeks.

This presents a real threat to education, for working class children in particular.

We have never had a fully comprehensive education system in England and Wales. The comprehensive reforms of the 1960s were halted before they achieved their aim, leaving substantial areas in the grip of selective education. Similarly, even in many comprehensives, streaming continued, moving selection between schools into selection within schools.

When New Labour introduced legislation to prevent the creation of new selective schools in 1998, they did nothing to address existing selection, something even the current Labour Party under Jeremy Corbyn has failed to address. This has meant that a strong lobby for grammar schools (and, of course the secondary moderns that go with them, has continued to exist.

New legislation, whether it allowed MATs to create selective 'centres of excellence', the creation of new selective schools or the conversion of existing comprehensives, would strike a real blow against equity in education.

It must be opposed at all costs and that means building the broadest possible alliances to defend and promote comprehensive education.

Comprehensive Future has a key role in building and sustaining these alliances and I would urge all those who care about the future of comprehensive education to sign up as supporters at www.comprehensivefuture.org.uk
Posted by Gawain Little at 15:05