Engaging the Community: The Campaign Kicks Off!

Today, it felt like our white paper campaign had kicked off in earnest locally with the first of 10 meetings for Reps & activists  in District 18 (or so I thought). The first meeting was in Windsor & Maidenhead, where a new committee has recently been elected after several years of no activity in the area. Much of the discussion focused on how to engage the wider community in opposition to the white paper. 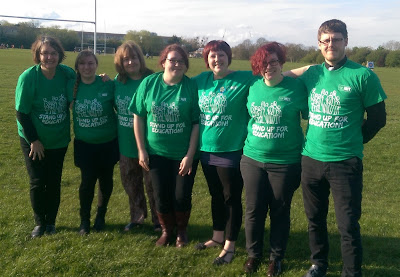 Our campaign has two distinct strands which, while clearly linked, are distinct. On the one hand, prompted by the fact that the white paper would effectively tear up national terms and conditions, we are balloting for strike action to demand more funding for better national pay and conditions that apply to all schools and academies. At the same time, we are campaigning with parents and the wider community against proposals to force all schools to become academies, scrap parent governors, abolish QTS and university involvement in Initial Teacher Education, and signal the end of the education system as a national service.

There was a great discussion amongst activists in Windsor and Maidenhead about how to build this second aspect of the campaign amongst the general public. They have decided to hold two events over the three weeks leading up to their next meeting on 18th May.

The fist will be a walk-about in Windsor on 7th May where they will be engaging members of the public, and especially parents, with stickers, balloons and leaflets, and asking them to sign up to support the campaign. Those who offer us support will be asked to speak to their friends and family and raise awareness of the issues and to give us their email address so we can contact them about future activity.

The second will be a family picnic on 14th May in a public park in central Maidenhead, with balloons, stickers, t-shirts leaflets and cake! Again, it will be an opportunity to speak to parents and let them know what impact these proposals will have on their children's schools, as well as signing them up for future activity.

They have also begun to divide up the schools who weren't able to attend between those at the meeting and will be calling them all and offering a follow-up school meeting between now and the 18th.

It was a great meeting full of energy and they have set themselves an ambitious programme for the next few weeks. Thanks to all the great teachers in WaMNUT!

I arrived home to find out that our activists in North Oxfordshire have decided to set up an additional Oxfordshire meeting for those in the North who will struggle to get to Didcot on the 12th May or Witney on the 13th. They will be meeting in central Banbury (venue tbc) from 4pm on the 20th May.

You can book in to this meeting by clicking the image below: 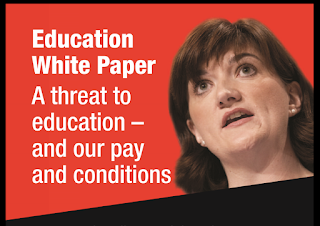