We are now only into the third week since conference and the union has been working at full pace to deliver material for the ballot and the wider campaign against the white paper. Christine thanked the union staff for all their work. 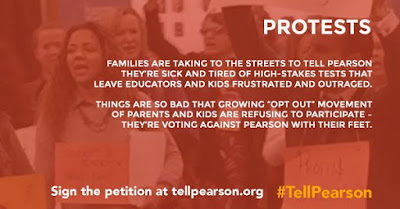 Christine referred to the fact that the DfE had accidentally published this year's SPAG test on their website, further undermining their botched attempt at assessment reform. Behind this are the very real dangers posed by an unfit assessment system based on no pedagogical understanding at all, which will damage children's education.

She went on to talk about a report produced by researchers into practice which recommended, on the basis of the existing practice of improving academies, "improving student quality by excluding lower-quality students". I will post a link to this report as soon as I have a copy (it was swiftly taken down!).

Next week will see a major milestone in the Pearson campaign as the NUT, alongside the AfT, Unison, ATL, SADTU and others, will be taking a motion to the Pearson Shareholders AGM, calling for a review of their business strategy around education privatisation and standardised testing. Whilst the company has gone out of its way to ensure the motion is not passed, it presents a huge opportunity to raise awareness of Pearson's dodgy educational practices.

You can support the Pearson campaign here: tellpearson.org

She ended by reaffirming the importance of our action ballot but also the broad range of work that the NUT is doing.
Posted by Gawain Little at 14:49