Reaching Out to Members

Today, I was in Thatcham to meet with West Berkshire activists about the ballot campaign. The meeting was divided into two parts. There was a training on academy conversion in the afternoon with Regional Officer Nick Childs, during which we also discussed how to reach out to schools across the authority, and I led a briefing after school on the white paper, in which we discussed how to engage members at school level. 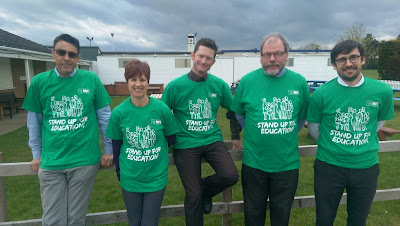 The key points from the latter discussion were:

During the afternoon, we split the association area up into four areas then looked at suitable schools in each in which to hold workplace meetings. Several of these were set up with Reps at the after school meeting and the rest will be contacted over the next few days. Each meeting will then be publicised to all members of the association, along with the offer of a workplace meeting at their school if there is not a suitable meeting for them.

I left the meeting confident that colleagues in West Berkshire have preparations for the ballot well in hand.
Posted by Gawain Little at 21:05