The General Secretary reported on the excellent response to the sixth form strike and the landmark case the Union won in the High Court. This centred on the government's attempt to get an injunction to prevent the strike. Their argument was that a strike over funding was a political strike (which is illegal under our repressive anti-union laws) and not a legitimate trade dispute. 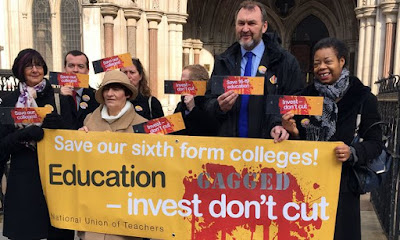 The Union successfully argued that, because funding allocations from government have a direct impact on our members' terms and conditions by constricting the employers' room to negotiate. This judgement sets an important precedent for Unions fighting government funding cuts and the politics of austerity.

She then went on to give an initial briefing on the Education Bill released today which will force every school to become an academy by 2020. The government were not able to provide any evidence that academies raise standards, or to answer the accusation that this Bill completely undermined local democracy.

This was followed by breakdown of the Budget Statement, which the General Secretary summed up as a reduction in capital gains tax and corporation tax on the back of benefit cuts for the most vulnerable.

The Trade Union Bill has suffered three significant amendments in the Lords. Whilst these still need to go back to the Commons, this is important progress. The amendments relate to:

Whilst these don't address the unreasonable strike ballot thresholds contained within the Bill, the use of electronic voting is likely to help make industrial action ballots more accessible to members. In the long term, the key restriction is the banning of workplace ballots under previous legislation. This has the effect of individualising what is supposed to be a collective decision and significantly affected turnout in industrial action ballots.

The fight to regain our right to hold workplace ballots will continue.
Posted by Gawain Little at 15:03